Same-sex sexual activity is prohibited under the Penal Code 1960, which criminalises acts of ‘consensual sex’. This provision carries a maximum penalty of seven years’ imprisonment. Only men are criminalised under this law. In addition to potentially being captured by laws that criminalise same-sex activity, trans people were previously criminalised under Article 198 of the Penal Code, which prohibited the ‘imitation of the opposite sex’, however this law was found to be unconstitutional in 2022.

Kuwait was a British protectorate until its independence in 1961. The 1960 Penal Code, adopted just prior to formal independence, continues to be in operation today and criminalises same-sex sexual activity. According to the Constitution, Islamic law is the main source of legislation in Kuwait.

There is some evidence of the law criminalising same-sex sexual activity being enforced in recent years. There was substantial evidence of the law criminalising ‘imitation of the opposite sex’ being enforced prior to it being found unconstitutional in 2022. There have been some reports of discrimination being committed against LGBT people in recent years, and transgender people appear particularly vulnerable to abuse.

In February, Kuwait’s Constitutional Court overturned Article 198 of the Penal Code 1960 which since 2007 criminalised the ‘imitation of the opposite sex’, ruling it unconstitutional. The law had been used to criminalise trans people, including convictions as recently as 2021 (see below). The move was welcomed by human rights organisations, including Amnesty International which hailed the development as a “major breakthrough” for transgender rights in the Gulf Arab region.

In October, a transgender Kuwaiti woman was sentenced to two years in prison for “imitating the opposite sex” under Article 198 of the 1960 Penal Code.

In April, it was reported that police arrested 41 people in a raid of a “homosexual massage parlour”.

A “moral” crackdown on the LGBT community was reported in August. Authorities deported 76 men and shut down 22 massage parlours that were suspected of being a hub for homosexual activity.

In May, 32 individuals were arrested for taking part in an alleged “gay party”. Numerous arrests have previously been reported.

A Human Rights Watch report on transgender individuals living in Kuwait suggested Article 198 was used to arbitrarily arrest transgender people, but that there were very few actual prosecutions.

A series of mass arrests as part of a ‘morality campaign’ were reported in 2012. The arrests appeared to target LGBT people and others suspected of ‘immoral activities’. It is not clear whether any of these arrests resulted in prosecution.

The US Department of State report noted that societal discrimination and harassment occurred, and was practiced by officials. No registered LGBT organisations existed, and no public events or pride marches were held.

In September, a Polish Instagram celebrity was arrested in a Kuwaiti mall for looking too feminine. He was detained by the police, humiliated and beaten before being released and deported after two weeks of detention.

In October, the authorities banned the Indian movie, “5 Weddings”, because it featured Hijras.

References
1. Penal Code 1960, Article 193 Consensual Intercourse Between Men
“Consensual intercourse between men of full age (from the age of 21) shall be punishable with a term of imprisonment of up to seven years.” Full text.

Iraq criminalises same-sex sexual activity between men and between women. Possible sentences are unclear, but the death penalty has been imposed on LGBT people.

Iran criminalises same-sex sexual activity between men and between women. Sentences include a maximum penalty of death.

Country profile of Saudi Arabia. LGBT people are Saudi Arabia criminalises same-sex sexual activity between men and between women. The gender expression of trans people is also criminalised. Sentences include a maximum penalty of death. under Sharia Law. 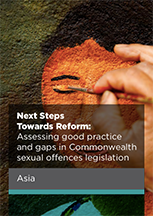 This report examines the status of sexual offences legislation in Commonwealth Asia, assessing good practice and identifying where there are gaps in protection, with a particular focus on women, children, LGBT+ people and people with disability.

Court of Criminal Appeal finds that consensual same-sex intimacy is a fundamental right and cannot be considered ‘unnatural.’

To mark LGBT History Month 2022, the Trust' new timeline chronicles the evolution of the criminalisation (and decriminalisation) of same-sex activity.