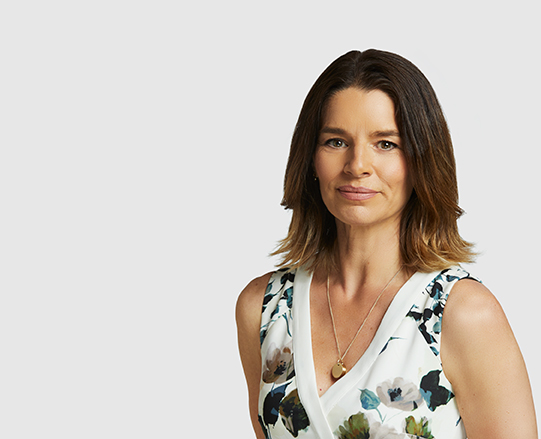 When the Human Dignity Trust was formed a decade ago with the core objective to challenge the criminalisation of LGBT people in the courts, we were met with doubt and resistance. At the time, decriminalisation was not on the forefront of issues in the LGBT sector and litigation was seen as futile. Now, ten years on, we have seen that using the law to defend LGBT human rights and staying true to the rule of law has not only worked, it has put decriminalisation firmly on the human rights agenda.

This LGBT History Month, we are looking back on the 500 year-long evolution of the criminalisation and decriminalisation of same-sex activity in our new LGBT History Month timeline. Our success as an organisation has not existed in a vacuum; lawyers, activists, policy makers and funders around the world are also fully engaged and as a result the number of criminalising countries continues to plummet.

In 2018, the Trust filed a first-of-its-kind case before the UN Committee on the Elimination of all Forms of Discrimination against Women (CEDAW), in which the complainant challenges the criminalisation of lesbians and bisexual women in Sri Lanka. She argues that the Sri Lankan Penal Code, which was amended in 1995 to criminalise same-sex sexual conduct between women, violates her human rights as protected by the CEDAW Convention.

I am especially proud of this ground-breaking case, which took over eight years to build, and used evidence from our Breaking The Silence report. It will be the first time the Committee has considered an individual complaint relating specifically to the criminalisation of lesbian and bisexual women. The imminent judgment will be significant for millions of criminalised lesbian and bisexual women around the world and have direct relevance in most of the 40-plus countries that currently criminalise same-sex intimacy between women.

Across LGBT history, women are easily erased and not afforded the same level of visibility as men, and this is also reflected in the conversations on decriminalisation. The CEDAW case signals the importance of recognising the intersectionality between women’s sex and sexual orientation and reinforces the message that womens’ different experiences of oppression matter. 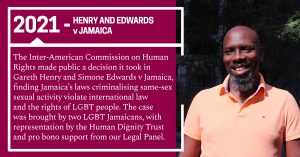 The Trust also worked for ten years on Henry and Edwards v. Jamaica up until the Inter-American Commission on Human Rights published its decision in 2021, finding the Jamaican government responsible for violating multiple rights of a gay man and a lesbian and urging an immediate repeal of the country’s homophobic laws. This was a crucial precedent-setting legal victory for the entire Caribbean region on laws criminalising LGBT people. This case was a test of patience and perseverance for us and the petitioners, but it was incredibly vindicating to be able to seek justice for two people who had experienced treatment horrific enough to force them to flee their homeland and claim refugee protection abroad.

As I look back further in the timeline, I must spotlight Dudgeon v. United Kingdom, the first case on the issue of criminalisation to succeed under human rights law anywhere in the world. This was the starting point of using the courts to achieve decriminalisation, and it paved the way for our work today. The European Court of Human Rights held in 1981 that Northern Ireland’s laws criminalising consensual same-sex conduct constituted a violation of the right to privacy under the European Convention on Human Rights (ECHR). It also had a much greater impact, as the principle of decriminalisation that it established under the ECHR became a condition for prospective states seeking to be admitted to the Council of Europe, and many states therefore repealed these laws prior to joining. Dudgeon was also relied upon in Toonen v. Australia, a 1994 decision of the UN Human Rights Committee, which resulted in the repeal of Australia’s last sodomy laws. 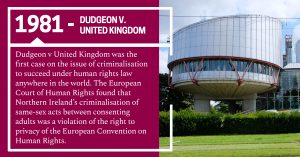 Equality and dignity are fundamental human rights afforded to everyone, and they underpin our core objectives at the Trust. The 1998 National Coalition case in South Africa was seminal on this, as the first domestic case to reflect these principles and move beyond the narrow and limiting idea of privacy. The Constitutional Court of South Africa held that the criminalisation of private, consensual same-sex sexual activity under the common law sodomy offence violated the rights to privacy, dignity, equality before the law and non-discrimination.

The Trust’s timeline highlights the huge advances we have all made in the global effort to achieve equality before the law for LGBT people, especially over the last 50 years. While the work is far from over, the timeline clearly demonstrates that there is significant reason to remain hopeful. Despite the shadows cast by centuries of criminalisation, we can clearly see the arc of history bending inexorably towards justice for LGBT people.