In the majority of Commonwealth countries, outdated sexual offences laws – many of which date back to the 19th and early 20th centuries – remain on the books.

These relics of the colonial era discriminate against, or fail to adequately protect, LGBT people, women, children and people with disabilities. For example, laws are still in existence that criminalise LGBT people, provide exemptions for rape in marriage, fail to provide comprehensive protection for all people against rape and sexual assault regardless of their sex or gender identity, and use derogatory terms to describe people with disabilities.

(CW: The following film contains mentions of physical and sexual violence and abuse which some viewers may find distressing and/or traumatic)

The Human Dignity Trust’s new film, The Sky Will Not Fall – Reform Discriminatory Sexual Offence Laws in the Commonwealth, the second in a series on law reform, was commissioned and produced in association with creative agency The Good Side, and funded by the UK Foreign & Commonwealth Office. Featuring beautifully shot footage from Belize, India, Kenya, Seychelles and Singapore, it is a heartfelt and compelling call to action and includes interviews with LGBT and women’s rights activists, government officials, lawmakers and experts on legislative reform.

Watch the video, a three minute version and other films on legal reforms in the Commonwealth on the Trust’s YouTube channel, and subscribe to catch all our new content.

Several countries, including Seychelles, have made real progress in reforming their laws through targeted reforms. Seychelles decriminalised consensual same-sex intimacy in 2016, but more that 70 jurisdictions worldwide, still criminalise LGBT people, with sentences ranging from two years in prison to the death penalty.

To find our more take a look at HDT’s in-depth reports on the reform of sexual offences legislation in the Commonwealth: 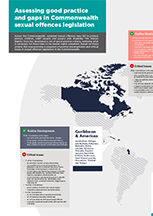