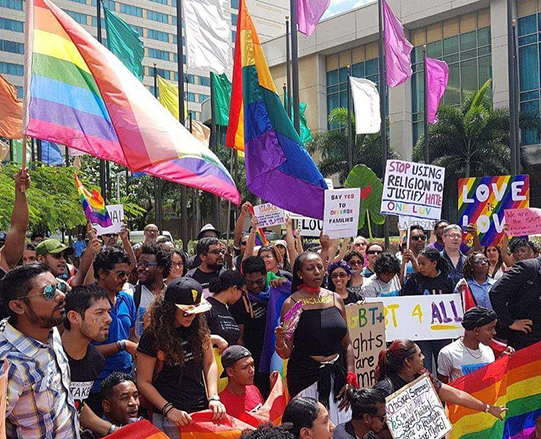 The Caribbean Court of Justice (CCJ) ruled on Tuesday that a 125-year-old law, which made it a criminal offence for a man or a woman to appear in a public place while dressed in clothing of a different gender for an ‘improper purpose’, is unconstitutional and is therefore struck from Guyana’s lawbooks.

The Court held that the law violated fundamental rights to equality, non-discrimination and freedom of expression and was ‘unconstitutionally vague’, whilst also observing that there was no means to determine accurately what is meant by ‘improper purpose.’

The five-judge panel agreed that ‘the law was from a different time and no longer served any legitimate purpose in Guyana,’ whilst also recognising that the country’s post-independence Constitution, the supreme law of the land, protects all citizens from discriminatory treatment by public officials.

The judges stated that, ‘No one should have to live under the constant threat that at any moment, for an unconventional form of expression that poses no risk to society, s/he may suffer such treatment.’

One of the judges, Mr. Justice Saunders, stressed the need for a progressive interpretation of the Constitution, stating that, ‘Law and society are dynamic, not static. A Constitution must be read as a whole.’

‘The Human Dignity Trust wholeheartedly welcomes this ruling affirming that transgender people should not be criminalised on the basis of their gender identity and expression. Laws criminalising LGBT people are progressively being dismantled the world over in recognition of the universal rights to privacy, dignity, equality, non-discrimination and freedom of expression that all of us share. We congratulate the local activists and lawyers who successfully brought this challenge right up to the highest level of court,’ said the Trust’s Director, Téa Braun.

The ruling comes almost a decade after seven people were arrested and detained in Georgetown under the 1893 Summary Jurisdiction (Offences) Act for being a ‘man’, and in ‘any public way or public place’ and for ‘any improper purpose’, appearing in ‘female attire.’ Under this offence ‘man’ was treated by the Guyanese authorities as a person who had been assigned male on their birth certificate, but who later identified as a trans woman.

According to the University of the West Indies Rights Advocacy Project, the Chief Magistrate hearing the case in February 2009 told the seven that they were confused about their sexuality and that they were men, not women, and advised them to go to church. They were convicted and ordered to pay a fine of $GYD 7,500 (approximately £27) each.

In 2010, four of the arrested people, who all identify as trans —Gulliver (Quincy) McEwan, Angel (Seon) Clarke, Peaches (Joseph) Fraser and Isabella (Seyon) Persaud—and the Society Against Sexual Orientation Discrimination, a local human rights organisation, brought an action arguing that the law violated their constitutional rights.

Both the High Court in 2013 and the Court of Appeal in 2017 dismissed the case, affirming that to constitute a crime, giving expression to one’s gender identity through clothing in public must be for an ‘improper purpose.’ However, the trans community felt that this argument left too much space for interpretation of the law by public officials, and took the case to the final appeal court for Guyana, the CCJ.

Aside from ruling that the law is void and awarding costs to the litigants, the CCJ also found that the original magistrate in the 2009 case acted inappropriately, stating that, ‘Judicial officers may not use the bench to proselytise, whether before, during or after the conclusion of court proceedings. Secularism is one of the cornerstones upon which the Republic of Guyana rests.’

The ruling landed during Transgender Awareness Week, typically observed during the second week of November, which raises the visibility of transgender people and focuses attention on the discrimination and violence they regularly face.

The Human Dignity Trust is a charitable organisation that supports local human rights defenders to challenge laws criminalising LGBT people, wherever such laws exist in the world, through the courts. Laws that criminalise LGBT people foster and perpetuate serious and systematic human rights violations and violate international human rights law.