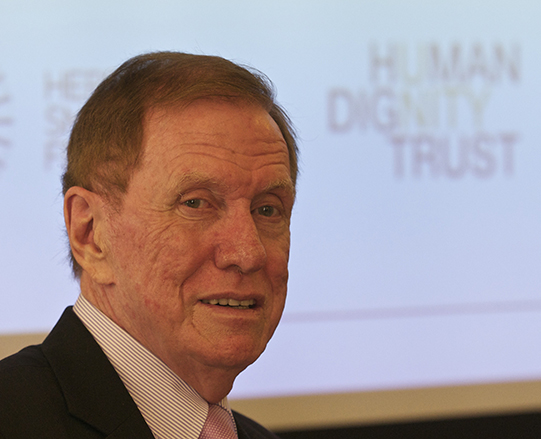 The Hon. Michael Kirby AC CMG, a former justice of the High Court of Australia and UN Special Representative on Human Rights, will be in London to give a lecture on the Commonwealth’s failure to safeguard human rights on April 21 2015

Justice Kirby’s speech, entitled: Can the Commonwealth of Nations Survive? A Dismal Story on Human Rights, focuses particularly on a failure to protect the lives and dignities of lesbian, gay, bisexual and transgender (LGBT) people across the globe. Justice Kirby has a unique perspective on this issue, being one of the leading experts in the drafting of the Charter of Commonwealth Values. Those drafting the Charter originally sought to create an office for the investigation of egregious human rights abuses within the Commonwealth, but this proposal was later rejected at a Commonwealth Heads of Government Meeting. Justice Kirby will express in his lecture how he saw his efforts diluted by an organisation which has consistently failed to intervene on behalf of oppressed LGBT people.

“As we approach one of the most uncertain General Elections in modern British political history, one of the questions the lecture will consider is what will our place in the world be. What message do we want to send to the rest of the international community? Though in many ways we have moved beyond our colonial past, the continued persecution of LGBT people around the world remains one of the most enduring echoes of our colonialism, based as it is on the laws that the UK exported. As we decide our own nation’s future, we must also consider what we want modern Britain to stand for internationally and the future of the Commonwealth is central to this.”

Of the Commonwealth’s 53 member states, 41 continue to criminalise homosexuality, endangering the lives and impinging on the basic human dignity of LGBT people within those countries. Justice Kirby will be condemning the appalling current state of human rights in the Commonwealth, and arguing that it is a direct consequence of the apathy of the Commonwealth’s most influential members. Justice Kirby will demonstrate the need for an international approach to these discriminatory and barbaric laws by pointing to the atrocities committed against LGBT people in countries such as Sri Lanka and the Maldives.

“Herbert Smith Freehills is delighted to sponsor the Michael Kirby lecture.  Mr Kirby has a long association with the firm, having launched our LGBTI network in Australia two years ago.  We share his and the Human Dignity Trust’s commitment to LGBT inclusion internationally.”

“We are pleased to be hosting the forthcoming lecture with Michael Kirby on the Commonwealth and Human Rights. The Law Society is committed to promoting equality and diversity in the legal profession, and commends the lecture’s focus on the need to protect LGBT people around the world. Although progress has been made there is still a long way to go both domestically and internationally.”